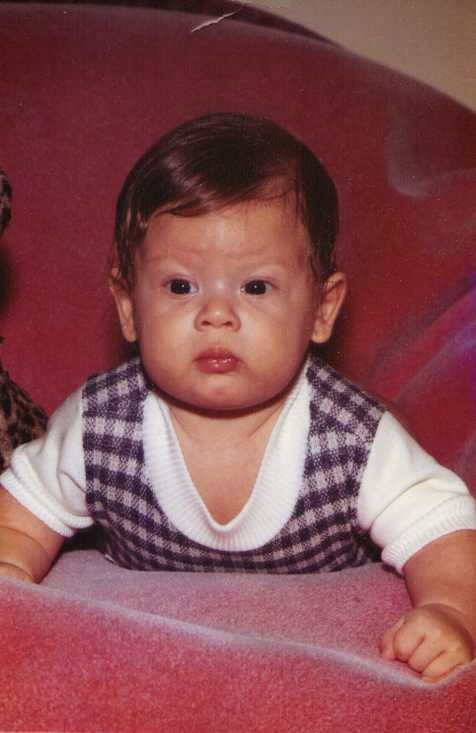 Hello, my sweet...yes it has been a while since we've seen each other.

Sadly, I feel it may be a while until we see each other again, and I suspect it will happen when I least expect or plan it.  The fact is there's too much to do, too many things to draw my focus, and not enough time to spend frivolously on observational humor, web links, and found photos.

Don't get me wrong, I've enjoyed every minute of it, and it has been as much an identity and ideology as any truly dedicated endeavor, but there are times that you recognize where a cycle starts and ends, and for now, this is a good point to make that mark.


It was difficult to allow this to fade away and phase out, the process becoming outwardly evident over the last year and a half with the inconsistent postings, but for me, it was harder because this fit perfectly into the spot reserved for self indulgence and exacerbated by a(n) (un)healthy obsessive / compulsive streak.  Once, it was imperative to make those multiple posts - up to 10 a day, in order to satisfy that urge, and even when that was broken and a more reasonable three were made, it was something that took some adjustment to be capable of.


So today I'm marking my 40th birthday, and like so many symbolic gestures, it occurred to me that it was timely, or at least time, to acknowledge the true pleasure and love I've had curating IOvUF, and for any and every single person who took the time to read a post.  And before we bookend this with a look back to the origin, I'll liberate, er, appropriate this perfectly poignant and spot-on speech by the late-and-always-great Dave "Oderus Urungus" Brockie for some context:

Now, without any further ado, take it away guys...

Really, it was more like the Big Whimper, but nonetheless my sense of wasting time triumphed over productivity and I shat out Living To Die. The concept was based on a combination of things The Good Doctor and I humored ourselves with, starting with the poignant final words of Roy Batty -- “time to die”. And much like the realization that all our moments and memories will eventually be lost like tears in the rain, so was the reaction and cynical afterbirth of the LTD philosophy – necessary and immutably true.


The mantra was a follows:


First you are born. Then you have a pretty good time for about 25 years. Then it is time for you to fucking die. I didn't make the rules. But I will enforce them.


In a sickly, sensible way it worked. The futility of jobs. The failure of relationships. The sacrifice of watching your dreams die. Nobody said that it was going to be easy, but no one said that it was going to be this hard, and at least we had the forethought to remember to smile stupidly while we were taking the beating. Yes, it sounds morbidly pessimistic, but it’s not.


Meanwhile, back in the oft-forgotten MAGNAband forums, I was hacking and slashing away at the same stupid brutality that life provides as both sport and amusement daily. In the hope of stunning people into thinking with radically sensible ideas I ingratiated myself with Schadenfreude. Sadly, some twat on Blogger has already claimed that perch on the web, and she actually thinks that her own pathetic, dull misfortune is going to provide us glee. News flash, sweetie – there is zero interest in your blandness. I’ve been in traffic that was more interesting that the pointlessness of your existence, and the fact you lucked into camping on one of the most kick ass site names is tragic. Let us all hope nothing but the worst for she who volunteered to be the schadenfreude touchstone, as it is by default no less than what she deserves for making such an egregious claim. Yet we digress…


In spite of a set of misanthropic tendencies, egotistical embellishment, keen awareness of stupidity and a lack of regard for restraint or correctness as a result, I have made the next evolutionary step philosophically. For a long time I fixated on the concept of an immovable object and an unstoppable force, and their inherent opposition to each other, which fit perfectly with my quasi-dualistic reasoning (which like the Soul Coughing song of the same name postulates “Is Chicago, Is Not Chicago” – and that’s loose meta-logic). The dichotomy is still there – living to die, as is the contrast of two concepts, but IOvUF is the examination of the complete nature of opposition, of being both caught between either side as well as being objectively aware of it.


Granted, all of that is a touch excessive given the overt applications here – satire, mockery, criticism, enlightenment, adoration, and creativity – not some revelatory direction in which to restyle my (your) existence. But we’re all still living to die, so while this may be nothing more than another voice for the vocal, it has changed, and for that I take pause to note -- before -- it is time to die.
Posted by famous m at 12:00 AM 7 comments: 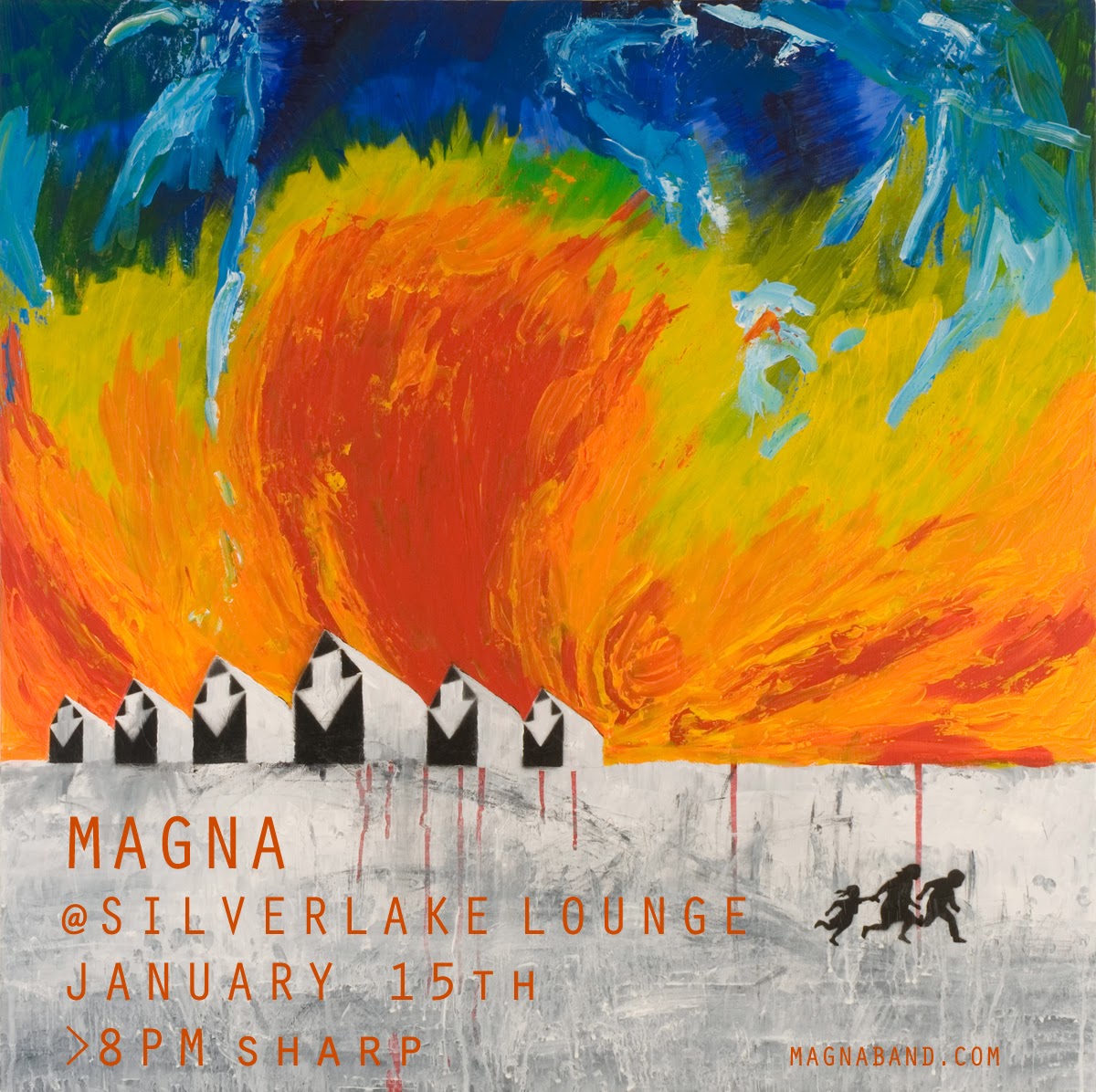 Yes, on the successful heels of last years return to form, MAGNA is at it again at the Silverlake Lounge on January 15th.

Facebook that shit for details, and see ya there.
Posted by famous m at 12:00 PM 16 comments: 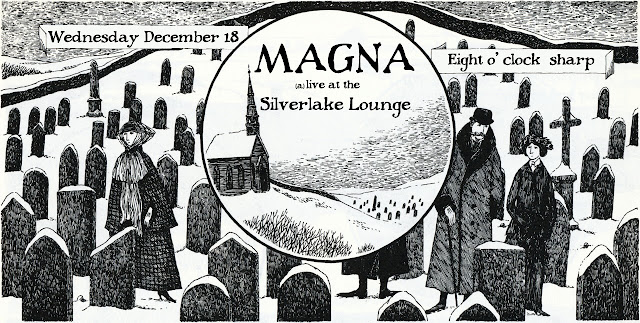 Sorry / you're welcome for the lack of posts in 2013...lots going on that doesn't make for interesting or funny blogging.  But important things like a long awaited MAGNA show will get posted.
Posted by famous m at 10:00 AM 3 comments:

Sure, my posts have been few and far between lately, but I have to break interweb silence to put these "trailers" up.  It's a kick ass album...if you like music, you need to buy it.  And if you don't like music, get it and take a listen so you can like music.

Pigs In A Steel Blanket

Americans have a new way to offend the world's Muslims, dead or alive.

Jihawg Ammo sells boxes of gun cartridges that are made with pork products, which they think are deterrents to potential terrorists (y'know, because they don't eat pork because of their religious beliefs). "With Jihawg Ammo, you don't just kill an Islamist terrorist, you also send him to hell," the company's press release state. "That should give would-be martyrs something to think about before they launch an attack. If it ever becomes necessary to defend yourself and those around you our ammo works on two levels." Brendon and Julie Hill, who developed the technology for the cartridges with his wife, started the company as a tongue-in-cheek way to stand up to radical Islamic terrorists. "We're having some fun with it," Hill said. "It's the proverbial middle finger back to political correctness."

Since they launched their website this Spring, the Hills "have been inundated with orders" for their custom cartridges, which retail for about $20 for a box of cartridges, but did not release sales figures.

I'm pretty sure Muslims do not believe in hell, and certainly not the Christian place purchasers think they're going to shoot them into. And unless you can well the info over your gunfire, or you're in a gun battle in a Jihawg Ammunition factory, I doubt there's much fear or a threat to them.
Posted by famous m at 12:00 PM 3 comments:

Labels: America must be destroyed, war

Manscaping Will Be A Lot Faster Now 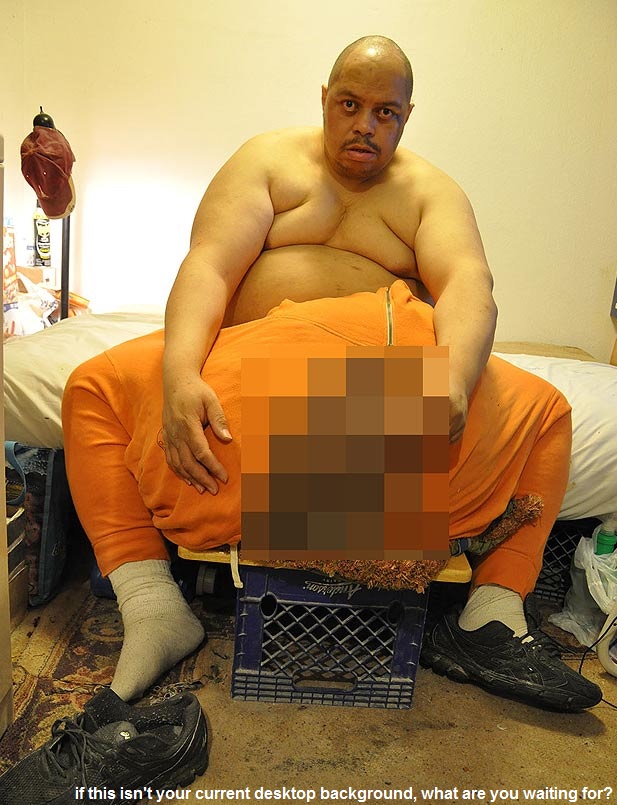 Wesley Warren Jr. had balls!  Or at least he used to have a giant one.

The 49-year-old had a 13 hour procedure to remove the 100 pound testicle that had grown so swollen that he wore a hoodie as a makeshift pair of pants. "I know the majority of people are probably expecting me to express extreme happiness and glee that my life has been transformed since the sac has been removed - but it’s not as simple as that," said Wesley. "I do feel a great sense of comfort that the weight is no longer between my legs. It got to the point that it was a danger to my health. But when I look down at what’s here now it’s not the same as what it was. It’s totally different."

But no, he disagrees, "My natural look prior to the growth is not what came out of surgery. What came out of surgery is a nub an inch long and it doesn't get any larger. I’m grateful to have been pulled out of the fire, I was getting burned, but now I’m dealing with the first degree burns. I’m still disfigured."

Hmmm, nice metaphor, but i don't understand how a perfectly normal penis becomes a Hedwig sized bit just because the thing below it comes out. Then again, I don't know how you let that thing get to be 20 pounds, let alone 50 or 100. But good on you Wesley...now go buy some real pants.
Posted by famous m at 7:30 PM 1 comment: 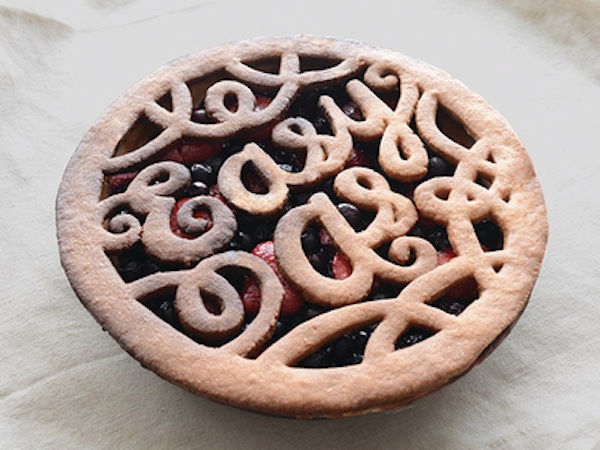 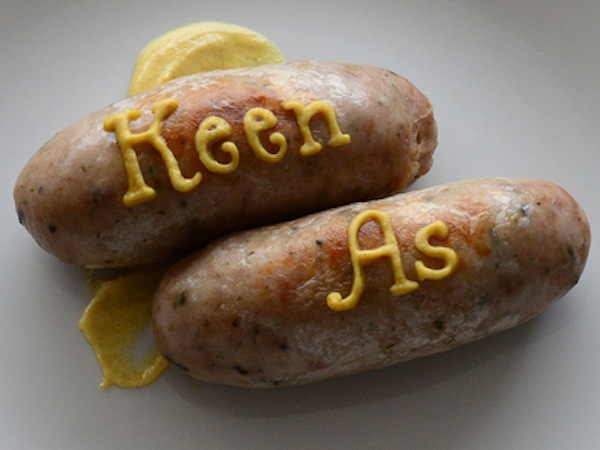 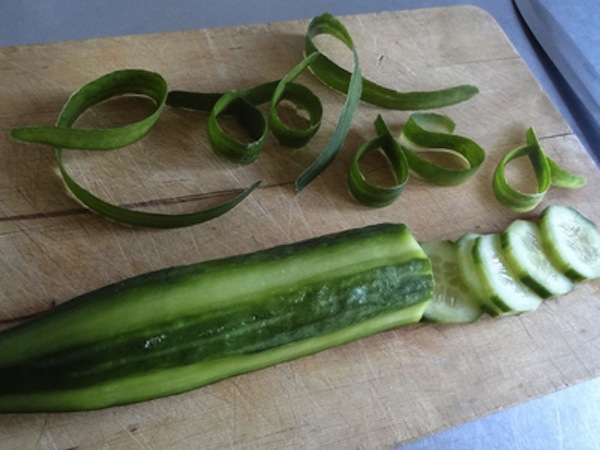 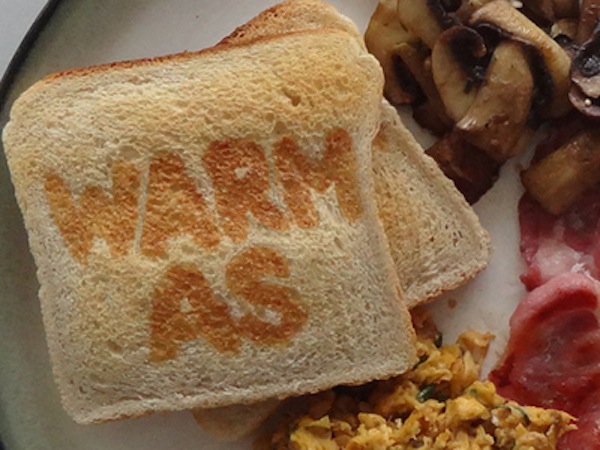 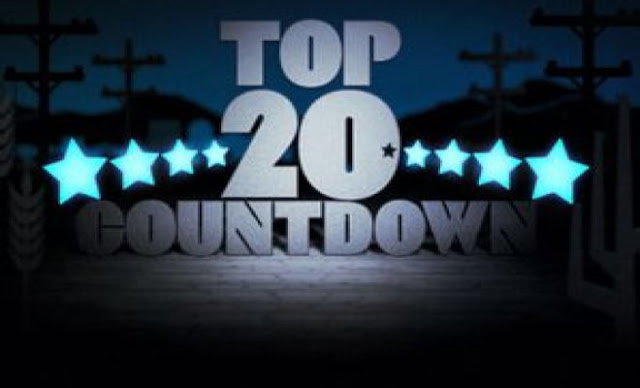 Counting down the top 20 links we didn't cover during the week...

20 • The Hilarious Difference Between Google And Bing In One Picture - Okay, maybe not hilarious. Which one of those search engines came up with that hyperbole?

19 • How Marc Maron Picks Music For His Show - A neurotic dart board?

18 • How To Use Math To Dominate At Monopoly - Interesting read, horrible layout with a million giant photos.

15 • Drunk Alaska Man Mauled After Feeding BBQ To Black Bear - In the bear's defense, he wanted fish, not ribs (even though he had some).

13 • Gruesome Video Appears To Be Aftermath Of Michael Hastings' Car Crash - Here's your chance to watch a wrecked car burn for five minutes. And if this ain't your cup of tea, you'll want to skip #4 for sure.

12 • Researchers Have Found A Way To Cram 1,000 Terabytes Onto A Single DVD - The disc said it was quite uncomfortable.

11 • The Academy Of Motion Pictures Currently Employs An Ex-Porn Director - Naturally...how else could the MPAA continue to screw people.

10 • A Battery So Small, You'll Never Know If It's Included - There's AA and AAA now, but this means AAAAAAAAAAAA is coming.

09 • Amanda Bynes: ‘I Got My Breast Implants Removed’ - 2013's boob of the year had hers normalized, but still has metal spikes in her cheeks and is out of her goddamn mind.

08 • AMA Declares Obesity A Disease - Huge (no pun intended) mistake. Lack of willpower does not have a prescription cure.

07 • Hollywood & Highland Allegation: She Took Picture Of Transients, They Stabbed Her To Death - My suggestion to kill all the homeless is worse than rounding them up for work interment camps, but I still theink both are effective ways to deal with the issue.

06 • Dim Star Becomes 7 Times Hotter In 160 Seconds - Not a reference to the Amanda Bynes story.

05 • Starbucks Raising Prices Despite Lower Bean Cost - The reason is because the, uh...because now it's more expensive to, um...oh, fuck it. They just greedy.

04 • Plane With Wing Walker Crashes At Ohio Show; 2 Die - The announcer is just making it worse before the actual crash.

02 • Snake Expert Killed By Snake While Helping People With Fear Of Snakes - Or, ironic death ironically adds to irony.

01 • British Spy Agency Is Saving Everyone's Email And Calls Too - Nice to see our colonial progenitors are keeping up with their kids.
Posted by famous m at 12:00 PM No comments: